A History of Welding: Sparks and Torches

Home > Machining  > A History of Welding: Sparks and Torches

20 Sep A History of Welding: Sparks and Torches

Posted at 05:10h in Machining, Welding by idmin

Around 1000 BC, the discovery and shaping of metals in ancient civilizations marked the actual history of welding as a metalworking process. Chronologically, those metals were copper, bronze, silver, gold, iron and, later stepped down to, steel. Gold, though, is said to be the first metal that had been subjected to welding. In 1330 B.C. Egyptians used to solder and blow in a pipe to connect metals. More iron work continued in 1000 B.C., where metal was bent using furnaces to produce swords and spearheads. During the Middle Ages, blacksmiths came to the fore. They used to weld various types of metals by hammering. 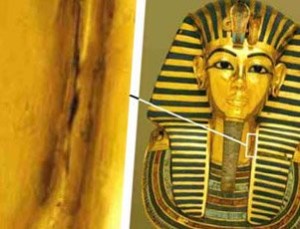 Inventing an arc between two carbon electrodes using a battery is credited to Sir Humphry Davy in 1800. Around the 1800s and early 1900s, American C. L. Coffin secured a US patent for metal electrode arc welding. N.G. Slavianoff used the same principle for casting metals in molds.

World War I was a big push for the welding industry. Subsequently, the American Welding Society was formed by the Wartime Welding Committee in 1919. Although CJ Holstag invented the alternating current during this time, it was commercially utilized in the 1930s. Automatic welding used in repairing and molding metals was first introduced by P.O. Nobel in 1920. Soon with the beginning of the 1930s stud welding became popular in shipbuilding and construction. Smothered arc welding was also invented in the same year and continues to be popular. 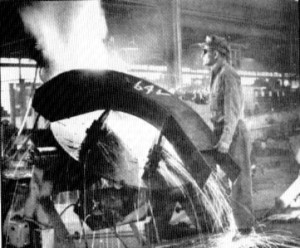 Meredith developed TIG welding for welding aluminum and magnesium in 1941. GTAW was another significant milestone in the history of welding which was developed in Battelle Memorial Institute in 1948. Economical CO2 welding process was popularized by Lyubavskii and Novoshilov in 1953. Soon after electrode wires of smaller diameter were launched and it made the welding of thin materials more convenient. 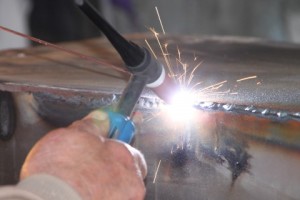 Dualshield, innershield, and electroslag welding were some of the welding processes that underwent development in the 1960s. Plasma arc welding which was used for metal spraying was invented by Gage in 1957 and Electron beam welding which is still used by the aircraft manufacturing industries was developed by J. A. Stohr at the same time.

The invention of friction welding and laser welding is another turning point in recent welding history. Then laser welding was developed in Bell Telephone Laboratories and now it is being used for various kinds of welding works. More modern techniques are under research and experimentation at the moment. There are more than 90 welding methods up to date making the welding both an art and a science.

Kaymor team appreciates the long history of the art of welding and provides the latest technology and professional craftsmanship serving the Grande Prairie area in Alberta. Contact Kaymor for your welding needs in Grande Prairie.